British Columbia is currently ranked as being the #5 province in the country for installing a solar power system, scoring as one of the best provinces for installation costs and for access to solar power.

This page contains all available information about installing solar in BC including solar incentives, regional geography, electrical utilities, and access to solar, as of 2019.

We’ve ranked British Columbia as being Canada’s fifth-best province for solar power in 2019. British Columbia scores higher than most provinces because it has the second-lowest installation costs in the country, good utility policies, and several energy incentives and financing options.

This section is intended to answer these basic questions before going into the details about installing solar in British Columbia.

Determining the size of system you need is as simple as knowing how much energy you use during the course of a year. Your monthly BC Hydro Bill will show your usage (in kWh) similar to the photo below: 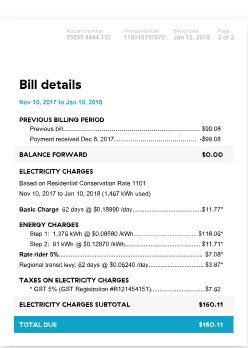 So let’s pretend you added up your hydro bills and determined that you use 10,000kWh over the course of a year, you would then do the above calculation and determine that you need a 9.96kW solar panel system!

Now that you know the size of your system, you’ll want to determine the best place to put it. Most residential homeowners in BC put the solar panels on their roof, while most rural homeowners put them on the roof of their house, shop, or on the ground in their yard.

The rough calculation is simple. Just take the size of your system and multiply it by the $2.64/Watt (the average cost of installing a solar system in British Columbia). Using the example from the sizing section, we can see that a 9.96kW system would cost approximately $26,294 to install.

Please note that the exact price of the system depends on several factors including the system size, the quality of equipment used, and the complexity of the job. Even the range in the chart above is just for the average – installation prices can easily go as high as $3.30/Watt for premium equipment installed by the highest quality installers.

British Columbia has relatively little solar energy rebates at the provincial level, however it does have several energy efficiency and electric vehicle rebate programs. This section briefly covers the energy incentives available to homeowners. A more in-depth explanation of each can be found on the British Columbia Incentives Page.

One important thing to keep in mind:

Although BC does not currently have any solar rebates at the provincial level, it is the only province with a PST exemption for all solar panels. The Alternative Energy Sources PST Exemption also covers solar thermal, as well as any necessary equipment needed for installation including wiring, controllers, inverters, pumps, and tubing.

The average British Columbia resident can offset their power consumption with a 9.96kW system and save $1,840 on their purchase.

British Columbia also has a number of other energy incentives available to homeowners:

Businesses can now use the Federal Tax Provision for Clean Energy Equipment to fully expense their solar system. This means a CCA rate of 100% and the abolishment of the first year rule.

In terms of available natural resources and homeowner energy demand, British Columbia is on the lower end for provinces in the Canada. This section briefly covers the amount of sunlight that BC receives (solar irradiation) as well as energy demand from homeowners.

British Columbia has the 11th highest potential to produce solar energy in all of Canada, receiving less solar irradiation than most other provinces and territories except for the Yukon Territories and Newfoundland and Labrador.

According to data from National Resources Canada, the average solar system in British Columbia can produce 1004kWh of electricity per kW of solar panels per year.

Here is how much an average solar system can produce each month, as well as the solar irradiation potential map for BC: 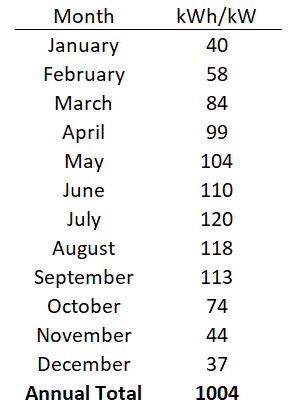 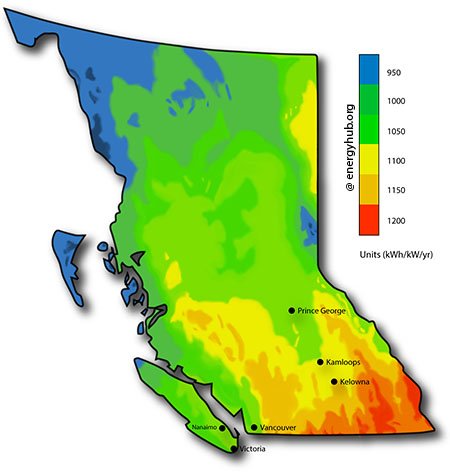 According to the Canada Energy Regulator, British Columbia uses approximately 13.5MWh of electricity per person, per year (including industrial and transportation demand)! And although only a small portion of this is used within the household, the number still demonstrates a strong need for energy generation and energy efficiency technologies.

British Columbia is one of the best provinces in the country to switch to solar power in terms of utility-related factors. This section covers how the costs of electricity and solar setup fees affect the feasibility of solar in BC.

Variable electricity rates determine the maximal amount of money that can be saved by switching to solar – ie. they represent the portion of your hydro bill that goes to zero when you don’t use any energy. Thus the relatively low rates in BC ($0.10/Watt) means that the average homeowner will save only a moderate amount of money.

On the other hand, fixed electricity costs are not so good because they don’t disappear even if you switch to solar power – you’ll pay them as long as you remain connected to the grid. However, this isn’t necessarily a bad thing – $11/mo is a small price to pay for using the grid as your energy back-up and virtual energy storage device (and much lower than most other provinces).

The only way to completely remove your fixed costs is to go off the grid, something most homeowners don’t do due to the large price and maintenance costs of battery storage. Plus, disconnecting from the grid means you won’t be able to participate in a net metering program.

Net Metering is one of the most important policy mechanisms that makes solar a feasible energy generation option. Net Metering essentially means that you can send the excess energy that you produce (during the day and summer) back to the electricity grid and earn credits for that energy at the same retail rate that you buy it for.

BC’s Net Metering Policies allow for systems up to 100kW in size to be connected to the grid for net metering, however it’s very important to note that credits in BC expire yearly, thus you’ll want to work closely with your installer to make sure your system perfectly matches your energy usage.

A completely new section to this year’s British Columbia solar guide, Access to Solar explores the major accessibility factors in the province.

The upfront cost of installation is obviously one of the largest factors that determines whether or not a person is going to switch to solar. The current prices in BC range from $2.25-$3.35 with the average price being somewhere around $2.64.

However, unlike a typical loan, this loan is attached to your property (not you) and is paid back alongside your property tax bill as a Local Improvement Charge (LIC). And while BC does not have a major PACE legislation, there are two communities that currently offer PACE and PACE-like financing.

The first is the City of Nelson’s On-Bill Financing Program which allows homeowners to borrow up to $16,000 for home energy upgrades and pay it back through their Nelson Hydro electric bill. Loans are approved based purely on payment history and property verification – no personal income or credit information is needed!

The second program is the Penticton Home Energy Loan Program which grants loans up t $10,000 to be paid back through your Penticton Electric Utility bill. However, this is not a true PACE program as the loan is dependent on your personal credit history.

Obviously though, PACE is not the only way to finance a solar system. Systems can be financed by cash, bank loans, installer financing, home equity loans, a home equity line of credit, a mortgages (for new builds), or through energy loans.

Several options exists for BC homeowners:

The final category that we ranked for this year’s British Columbia solar guide is the access to reputable and high-quality solar installers. And fortunately, BC has no shortage of them.

British Columbia has a great PST exemption on solar panels, low installation costs, and an abundance of reputable solar companies, thus we rank BC as being the #5 best province in the country for switching to solar power.

It is about time that people tend to go solar as it is in the interest of everyone involved. I think this guide would help me implement that system in a better way as before.